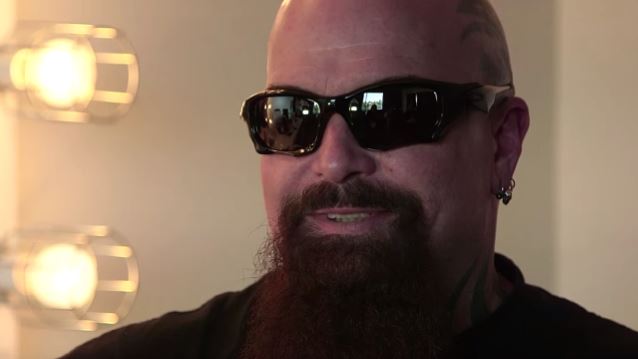 SLAYER guitarist Kerry King recently spoke to Banger TV about longevity, the death of fellow SLAYER axeman Jeff Hanneman, and the quest for the perfect riff. You can now watch the chat below.

Asked what keeps him motivated to create new music after all these years, King said: "It's the quest for the perfect riff. I don't know if anybody's done it. I know a lot of bands have made some great riffs; we're one of 'em. It's inspiring in a sense, because I keep trying to outdo something I've done... not really so much other bands anymore. I mean, that was just a playful thing we had in the early '80s. You know, you get a new METALLICA record, then you go listen to it, then you go try to beat it. And I'm sure those guys did it with us, and ANTHRAX, and MEGADETH — that little nucleus of the four."

He continued: "I like doing this, and I know I'm not gonna do it forever, so I try to emjoy it more. I still get goose bumps — big time. If I didn't shave my arms, there'd be hair standing up, 'cause I'm still into it. I am a fan first."

SLAYER's new album, "Repentless", debuted at No. 4 on The Billboard 200, having shifted 50,000 equivalent album units in the week ending September 17.

"Repentless" was released on September 11 via Nuclear Blast. The follow-up to 2009's critically acclaimed, Grammy-nominated "World Painted Blood" was produced by Terry Date, who has previously worked with PANTERA, DEFTONES and SOUNDGARDEN.