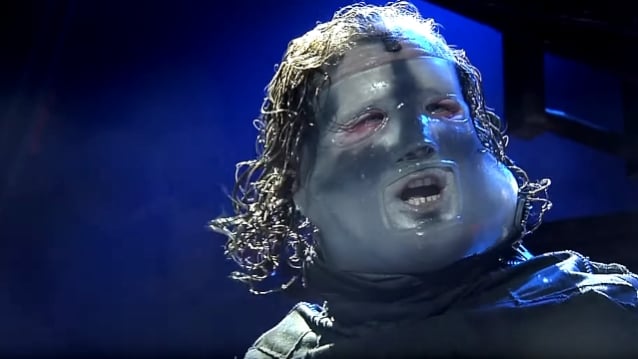 The reaction has been strong to Corey Taylor's new SLIPKNOT mask, with the frontman seemingly reveling in the negative backlash it has received from some segments of the band's fanbase. Taylor worked on the mask with special effects legend Tom Savini, whose extensive career in the film industry and especially the horror genre dates back to the late 1970s, including such films as "Friday The 13th", "Dawn Of The Dead", "From Dusk 'Til Dawn" and many others.

In a recent interview with Mistress Carrie of Boston radio station WAAF, Taylor explained the creative process behind his new mask and what it represents to him.

"We were playing around with a bunch of different stuff," he said (see video below). "We were kind of throwing stuff back and forth, but nothing had that DIY look that I wanted. The way I was describing it was I wanted it to look like it was made in a basement. For real. Like, someone had crafted it in a basement, maybe for nefarious reasons. You never know. I wanted it to have that look of, and, I wanted it to be really off-putting. Like, you couldn't really look at it. And, that's how we got to that one was by going, 'Well, what if you could just almost see through it? You can kind of see your face, but then not?' Almost, like there's a movie called 'Alice, Sweet Alice', which is really disturbing. It's a little kid wearing this almost see-through mask running around killing people. That really inspired me from that point of view, and then I would paint my face underneath, and the cool thing is I could paint it differently every night. Then I actually got some feedback from some people, which took me in a completely different direction of people who had grown up with burns, and it actually resembles the mask, like the new skin kind of thing that they wear as the skin is healing. And they said that seeing me in that was very, I don't want to say 'liberating,' but it was [it made them feel so not weird]. I loved that. I immediately took it out of that horror book idea and immediately was more metaphorical and actually more in line with what the lyrics for the album were about. It actually felt really good to be able to kind of have something that touched people in a way. I know a lot of people didn't like it, but I don't really care."

SLIPKNOT's new costumes were unveiled in May to coincide with the band's appearance on "Jimmy Kimmel Live!"

SLIPKNOT's latest album, "We Are Not Your Kind", was released August 9. It was once again recorded at a Los Angeles studio with producer Greg Fidelman, who engineered and mixed SLIPKNOT's 2004 album "Vol. 3: (The Subliminal Verses)" and helmed 2014's ".5: The Gray Chapter".

SLIPKNOT's "Knotfest Roadshow" U.S. headline tour kicked off in July. VOLBEAT, GOJIRA and BEHEMOTH are providing support on all dates.