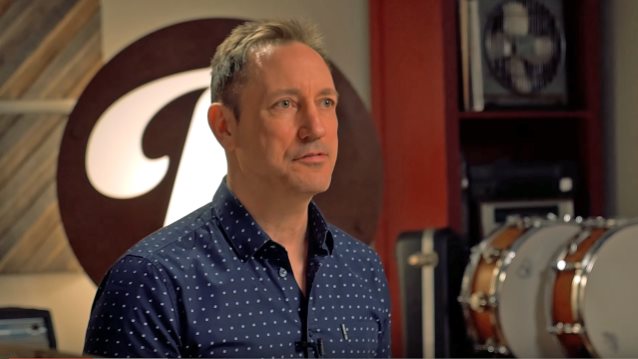 SMASHING PUMPKINS drummer Jimmy Chamberlin has hinted at a 2018 reunion of the band's original lineup.

Founding member and main songwriter Billy Corgan has been touring under the SMASHING PUMPKINS name for several years with a newer lineup of musicians, although Chamberlin rejoined the band two years ago.

More significantly, Corgan confirmed last summer that he had repaired his friendship with original bassist D'Arcy Wretzky, after not speaking for nearly two decades. With Chamberlin back in the band already and guitarist James Iha joining them onstage for the first time in sixteen years in early 2016, a reunion of the group's original lineup appears to be imminent.

Chamberlin seemingly confirmed the PUMPKINS reunion rumors during a brand new interview with Justin Kaufmann, host of "The Download", which airs on WGN Radio in Chicago.

"We were talking about playing next year with the band and somebody asked me, you know, 'What's it like trying to coordinate that?'" the drummer said (hear audio below). "I said it's like 'Grumpy Old Men 3', only there's four grumpy old men and one's a woman.' [Laughs] So… that's how it's gotten to be."

Chamberlin also opened up about his complex relationship with Corgan, who once publicly called the drummer "a fucking liar."

"The two hours that we spend playing music together is the greatest thing in the world," Jimmy said. "It's the other twenty-two hours of the day that him and I are… He's got opinions, I've got opinions; we're both grown men, right?"

He continued: "D'Arcy, I think, summed it up the best when she said… When they asked her just an insanely rude and misogynistic question… They said, 'What's it like being a girl in the SMASHING PUMPKINS?' And she said, 'It's like being married to three guys you wouldn't even date.' [Laughs] So I think that's the best answer."

Chamberlin added: "Musically, we've never been at odds. I mean, I can honestly say that since 1988, I don't think Billy and I have ever argued about music one time. I can't think of one time where I played something and he was, like, 'What?' Or he played something and I was, like, 'Oh, don't…' Our musical relationship is that intact, which is… Even when I came back to do the [MARILYN] MANSON tour in [2015], we hadn't played since 2007. I mean, you're talking about going out and [playing in front of] eighteen thousand people. We rehearsed for five days — that was it. And after two days, we were ready to rock. I mean, it's just in your DNA."

Corgan told Chicago radio station WLUP earlier in the year that a reunion of SMASHING PUMPKINS' original lineup seemed more and more likely. Corgan revealed: "I just talked to guitarist James Iha the other day, things look good for us getting together to play. We're talking about it, we'll see."

But Corgan added: "The reunion thing is always a bit weird, because then people come in with their expectations. So my whole thing is if we're going to do it, I think we do it to make people happy, and not go against the tide of what people would want to hear and that type of stuff, but my interest in it is sort of limited. I'm not going to do it for fourteen years of my life."

Corgan went on to say: "We're not rushing to something. We have to repair some things between us and see what's out there for us, if those opportunities are even there."

The original SMASHING PUMPKINS lineup last played together on April 24, 1999 in Los Angeles.