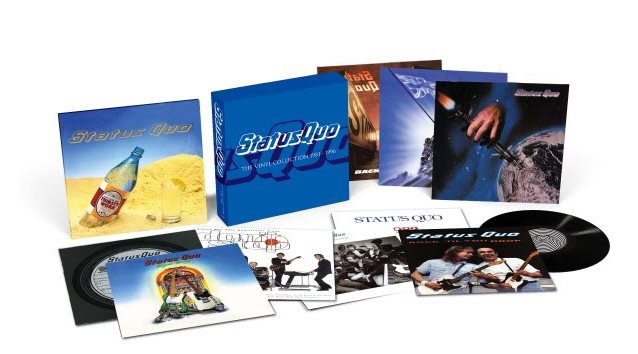 British rock band STATUS QUO will release "The Vinyl Collection 1981-1996", on February 24, 2017 via UMC. This carefully curated release comes as a ten-LP deluxe edition box, with each LP also available via a digital download code.

All of the material contained within "The Vinyl Collection 1981-1996" is remastered from original tapes and presented on 180-gram vinyl with original covers and inserts.

This incredible collection takes us further into the world of one of the U.K.'s most cherished bands, with albums such as "Rock Till You Drop", "In The Army" and "Never Too Late". It also contains the never-before-on-vinyl "Don't Stop" as well as the hard-to-find "Perfect Remedy". To top it off "The Vinyl Collection 1981-1996" also contains a disc featuring a selection of rare 12" mixes.

Charting the growth, development and burgeoning power of one of hard rock's all time classic acts, "The Vinyl Collection 1981-1996" is a tour de force highlighting the incredible catalogue created over one incredible decade by rock's true survivors.

With nine complete albums, and a rarities album, this is a phenomenal collection that will be cherished by QUO fans the world over.