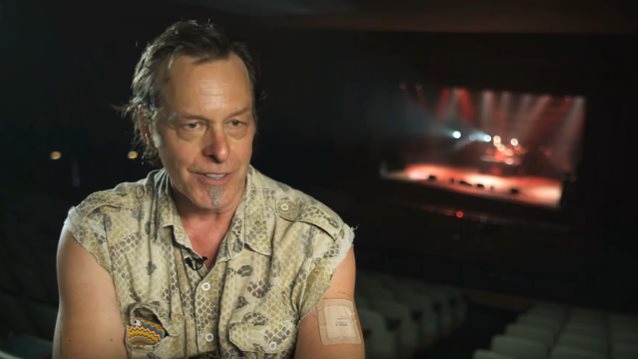 Outspoken conservative rocker Ted Nugent has slammed comedian Kathy Griffin for her most recent act — a photo of Griffin holding a bloody, severed head in the likeness of President Trump — calling it "downright vulgar, obscene and a genuine variation of a death threat."

After Griffin's image — taken by photographer Tyler Shields — went viral on social media, it elicited strong criticism from liberals and conservatives alike, forcing the conic to apologize. "I beg for your forgiveness," Griffin said in a video message. "I went too far."

Trump denounced the photo Wednesday, calling it "Sick!" and saying Griffin should be ashamed.

Nugent, who has made countless headlines over the years with his incendiary comments — including a 2007 stage monologue during which he said then-Democratic presidential candidate Barack Obama could "suck on my machine gun" and referred to Hillary Clinton as a "worthless bitch" who could "ride one of" his guns "into the sunset" — said that there was "no comparison whatsoever" between his past statements and the actions of Griffin, whom he called "a far leftist" who "hates the Constitution."

During an appearance on the syndicated "Ben Ferguson Show", Nugent said: "Well, the left and the democrats are so desperate, they're so gagged by genuflecting at the altar of Saul Alinsky with their lies and their fake news. Their dishonesty is absolutely stunning. To compare what I said when I identified the egregious crimes of Hillary Clinton with her scamming foundation and lying to the public and lying to the families of Benghazi, refusing to provide security for our men and women in Benghazi, after being begged to provide that basic security as the Secretary Of State. … I mean, we're talking apples and grenades here. What Kathy Griffin did was downright vulgar, obscene and a genuine variation of a death threat."

Nugent, who was investigated by the Secret Service in April 2012 after saying that he would be "dead or in jail by this time next year" if Obama was re-elected, continued: "I've never threatened anybody. And if anybody's still trying to believe that I did, maybe they should talk to my buddies at the Secret Service who were forced to investigate me by Nancy Pelosi and Barbara Boxer and Dianne Feinstein. And their conclusion — the Secret Service's conclusion — was that I never made any threat to anyone. But, again, the left doesn't care about the truth, they don't care about honesty, they don't care about the facts. So I think this is the perfect example of the left, their cockroaches are spotlighting their own cockroaches, and now they're scrambling to try to find a shadow to hide in. And there's no comparison whatsoever."

He added: "When I made the statement that if Barack Obama was elected for a second term I would either be dead or in jail, that was a genuine and well-evidenced fear of my government. I was in fear of the abuse of power, the corruption, the criminality that ran amok in the Barack Obama administration. Everybody knows that. Only an idiot like Barbara Boxer and Nancy Pelosi, who struggle to form syllables, thought otherwise."

In a lengthy Facebook post last year, Nugent said Obama and Clinton should be tried for treason and hanged over their handling of the terrorist attack in Benghazi, Libya. The rocker told "Ben Ferguson Show" on Wednesday that he stands by his comments. "I've never threatened to hang anybody," he explained. "I've never suggested anybody get hung, except the one time after Benghazi, I recommended that Hillary Clinton be charged, arrested, tried and hung. What she did as secretary of state was certainly treasonous, and I stand by that."

As for Griffin's apology, Nugent was predictably unmoved. "I don't think much of Kathy Griffin," he said. "I think she's a far leftist, I think she hates the Constitution, I think she hates law and order, I think she sides with thugs instead of law enforcement. So she's got a lot of problems of her own. But I think she's admitted, and I think we can all agree, she went beyond the pale. There's never a time that you should threaten and poke fun at the beheading of anybody, much less the President."

Nugent and fellow Detroit-bred rocker Kid Rock got to spend some time in the Oval Office with President Donald Trump on April 19. They were joined by Sarah Palin, the former Alaskan governor and GOP vice presidential nominee, who posted photos of the visit on social media the following morning. Nugent later told the Detroit Free Press that he and Kid Rock represent a salt-of-the-earth American demographic that helped Trump land the presidency.