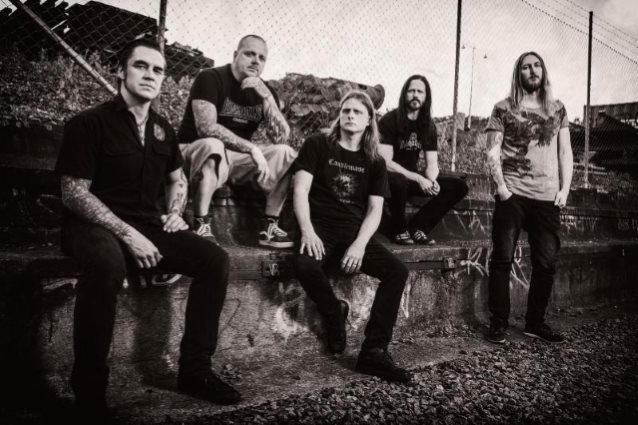 Swedish metallers THE HAUNTED have extended their long-standing co-operation with Century Media Records by signing a new worldwide deal with the label.

Commented the band: "We are very pleased to announce that THE HAUNTED has re-signed with Century Media Records, expecting a new album in 2017. Right now we're in pre-production mode and the material we have now sounds really heavy and thrashing."

THE HAUNTED has just been announced as main support to MESHUGGAH for their upcoming tour of the U.K. and Ireland in January next year. The eight-date trek will kick off on January 12 at Bristol's Academy and will finish on January 20 at London's Forum.

Earlier in the year, THE HAUNTED guitarist Ola Englund told Kaaos TV about the upcoming follow-up to 2014's "Exit Wounds" album: "I think that with 'Exit Wounds', there was a lot that THE HAUNTED needed to prove, because it was some kind of a comeback album, in a way. And I think the pressure of that album, we don't have that with this one, so with this one, we can take more time, we can focus more on maybe quality. And we don't have to do everything super fast or play super-fast songs."

He continued: "I think for the dynamic of the album, it will be a lot better this time than 'Exit Wounds'. 'Exit Wounds' was just a head-on, super-intense album from start to finish, and I think with this one, it's way more dynamic sounding. I mean, from the songs that we've written so far. So it's gonna be interesting."

Asked if they felt they were rushed during the making of "Exit Wounds", Ola said: "Not necessarily rushed, but it was stressful for us [during] the recording. I mean, we had a deadline, and we were basically late on that deadline a couple of times. If we had gotten more time, we could have put a lot more effort into that album. But everyone was waiting for the album, and we had to do something. But we're still happy with the album."

Added vocalist Marco Aro: "[Now] the people understand that we're back and we're around, so we don't have to try to catch a window where we need to fit in there. So, as Ola said, we can keep it a bit more relaxed and more thoughtful."

"Exit Wounds" was recorded with THE HAUNTED's longtime producer Tue Madsen at Denmark's Antfarm Studio (DARK TRANQUILLITY, HEAVEN SHALL BURN, SICK OF IT ALL).