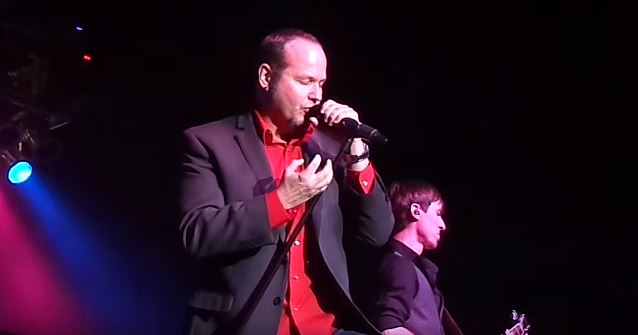 Owens recorded two studio albums with JUDAS PRIEST — 1997's "Jugulator" and 2001's "Demolition" — before the band reunited with Rob Halford. Owens told Dubai's Mainstage Events that parting ways with JUDAS PRIEST in 2003 after a seven-year stint with the band "was all right. We knew if was gonna happen — I did, at least. And you know what? It wasn't upsetting. I had just recorded an ICED EARTH record, and it kind of felt like my time in JUDAS PRIEST was probably over. And [I was] kind of wishing it was over, in a way, to move on to ICED EARTH and do other things. And it was definitely best for JUDAS PRIEST, it was definitely best for Rob Halford, and it was definitely best for me. I would have never quit JUDAS PRIEST; I would have stayed in it forever, because I love the guys and I love what I was doing with 'em. But, as a career, to do things for my career, I had to move on. So it was okay. It was something that… It didn't offend me when JUDAS PRIEST let me go. I think it offended some family and friends and stuff at the time, but it didn't change my relationship with JUDAS PRIEST either, not has it changed with Rob Halford; we're all still good friends."

Zaza's touring has cemented him as a true guitar phenomenon. He's played alongside and shared the stage with such guitar luminaries as Joe Satriani, Steve Vai, Yngwie Malmsteen and Nuno Bettencourt. His recordings feature collaborations with VAN HALEN's Michael Anthony, DREAM THEATER's Jordan Rudess, drumming legend Steve Smith and Peter Frampton, among others.